On 13th September members gathered for the tournament marking the first day of our 2019 season. I think that the number 13 was an indicator of how things would go as, after two rounds, the Heavens opened and play was abandoned! Thanks to Paul and Judy for organising things so well only to be thwarted by the weather.

However, the court was looking superb thanks to the efforts of Derek and his small team of volunteers who, in addition to liaising with Brighton and Hove Parks and Gardens in the absence of Evan, had made sure that everything was marked out and installed as it should have been. 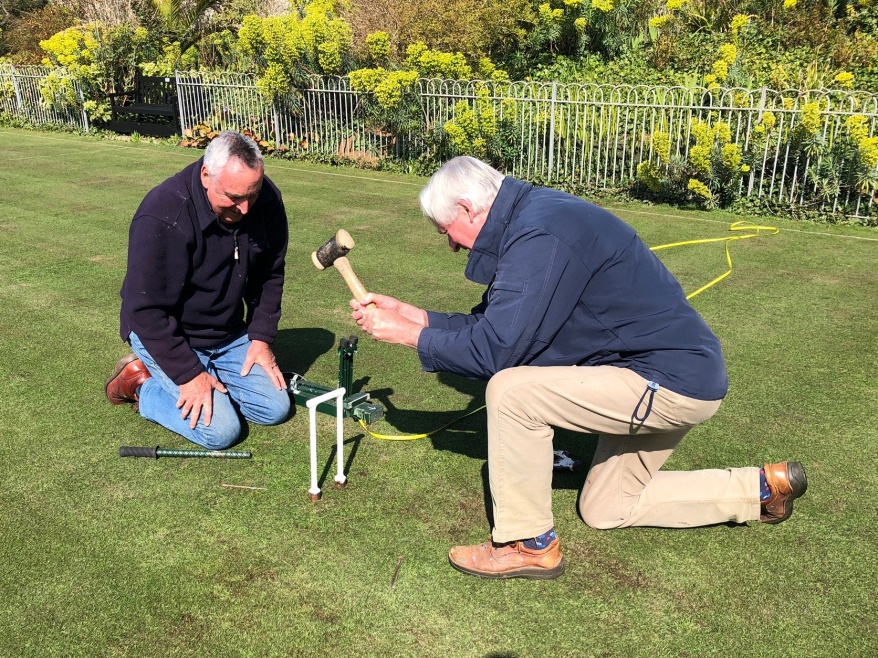 Derek and Wray measuring up and hammering in the hoops

Evan’s absence could mean that the upkeep of the gardens may not be done to the standard to which he aspired, but the signs are, after four weeks into the season, that you should notice little difference in the standard of the playing surface of the court. Trevor has agreed to undertake watering duties which is a huge help and we are all very grateful to him for doing this on our behalf.

At the moment welcome repairs are being undertaken to some of the flint wall constructions on the approach to the Club and also to the crazy paving pathway which has long needed some attention. These works, being undertaken by Brighton and Hove City Council, are quite extensive and may go on for a while which means that, temporarily, we must all take the scenic route to the Club in order to skirt around the working area. Please do not try to cut through the area marked with the red barriers.

While on the general subject of Kipling Gardens, I can update you on the situation regarding the bees which caused some concern last Tuesday when they swarmed around the court causing some members to stop play and leave the area. The bees are owned by Rottingdean Preservation Society who have had no success in finding an experienced bee keeper to look after them following the leaving of Bob Curtis, former Chair of the local Beekeepers Association. Hence, they have written to Brighton and Hove Parks Department requesting that the bee colonies be removed from Kipling Gardens even if only on a temporary basis until the problem is solved.

Various coaching groups for both Golf Croquet and Association Croquet have been formed and the full coaching programme has begun. 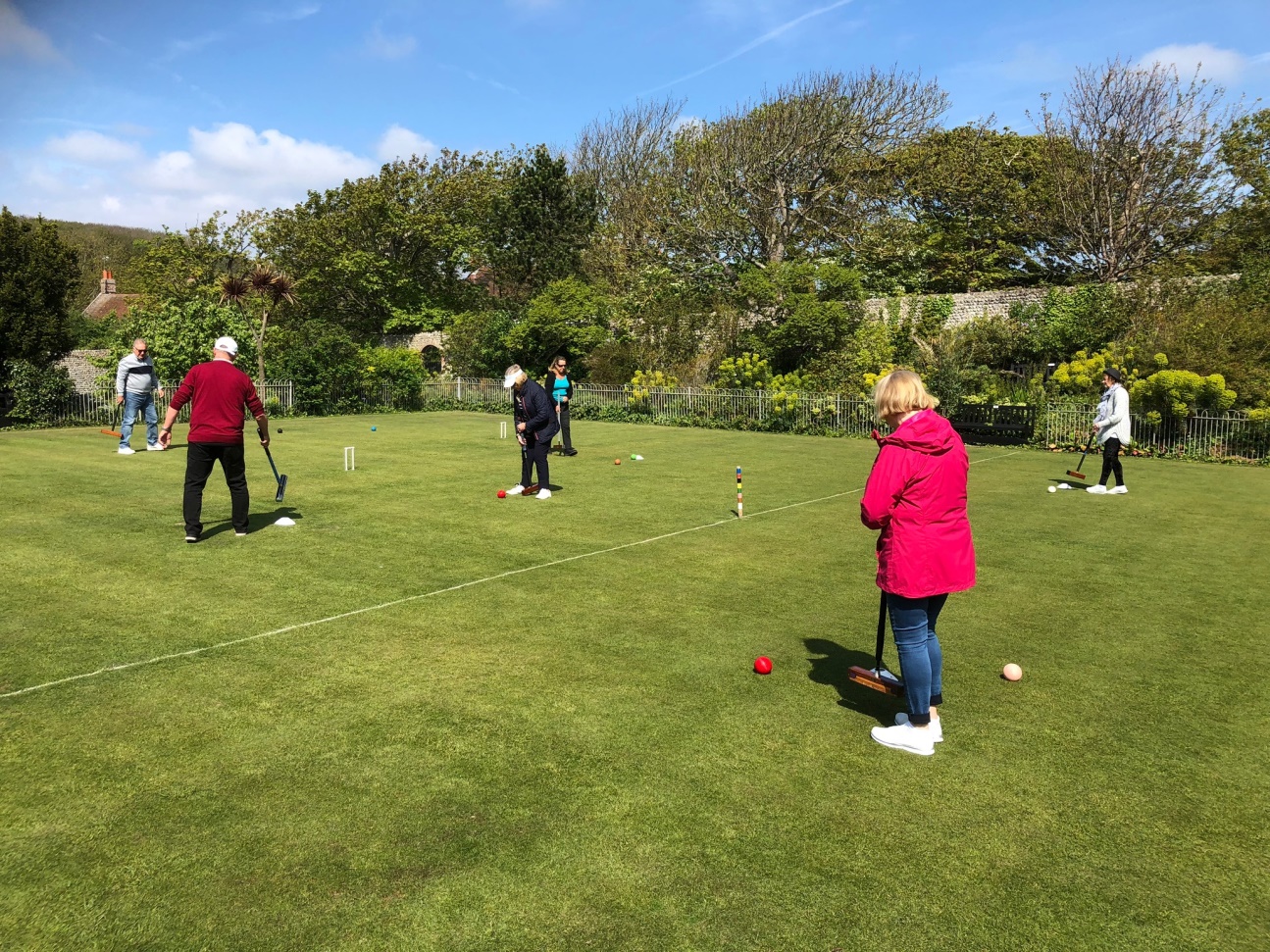 The Coach says to one of the GC Improvers’ Group, “Try to put the ball here.” 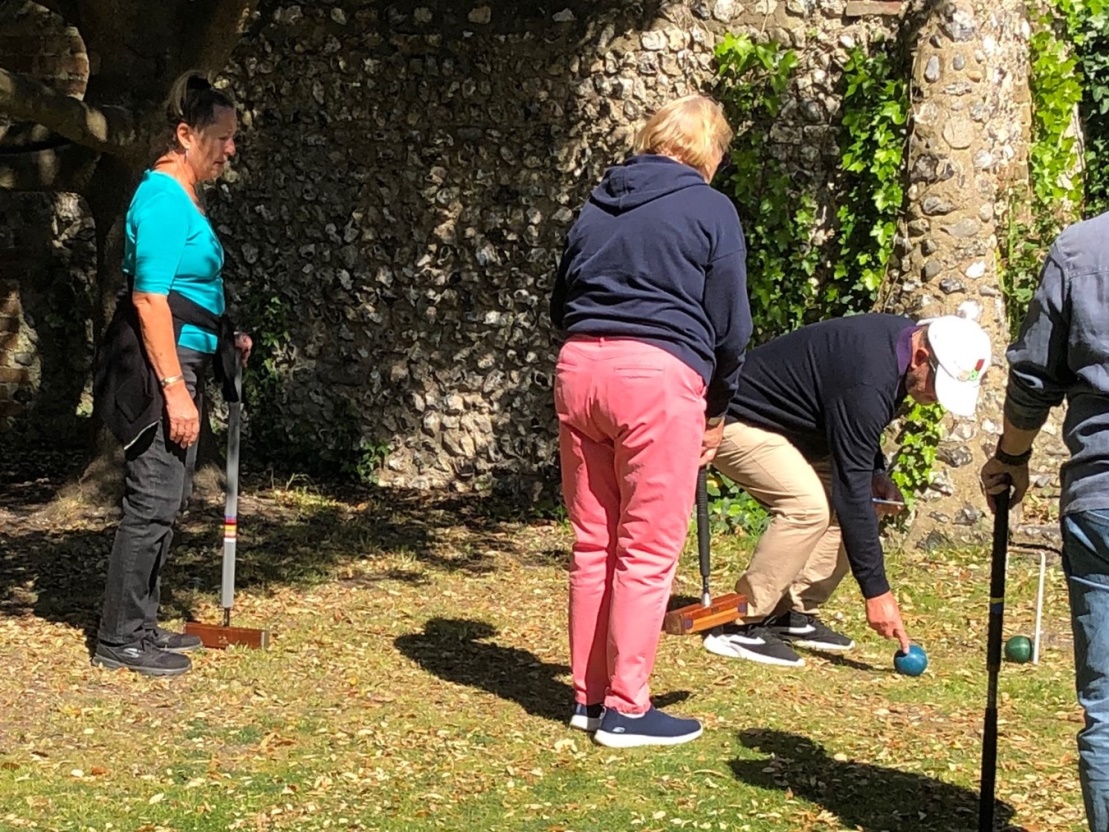 ……………and, when taking a jump shot, “This is where you are aiming to strike the ball.” 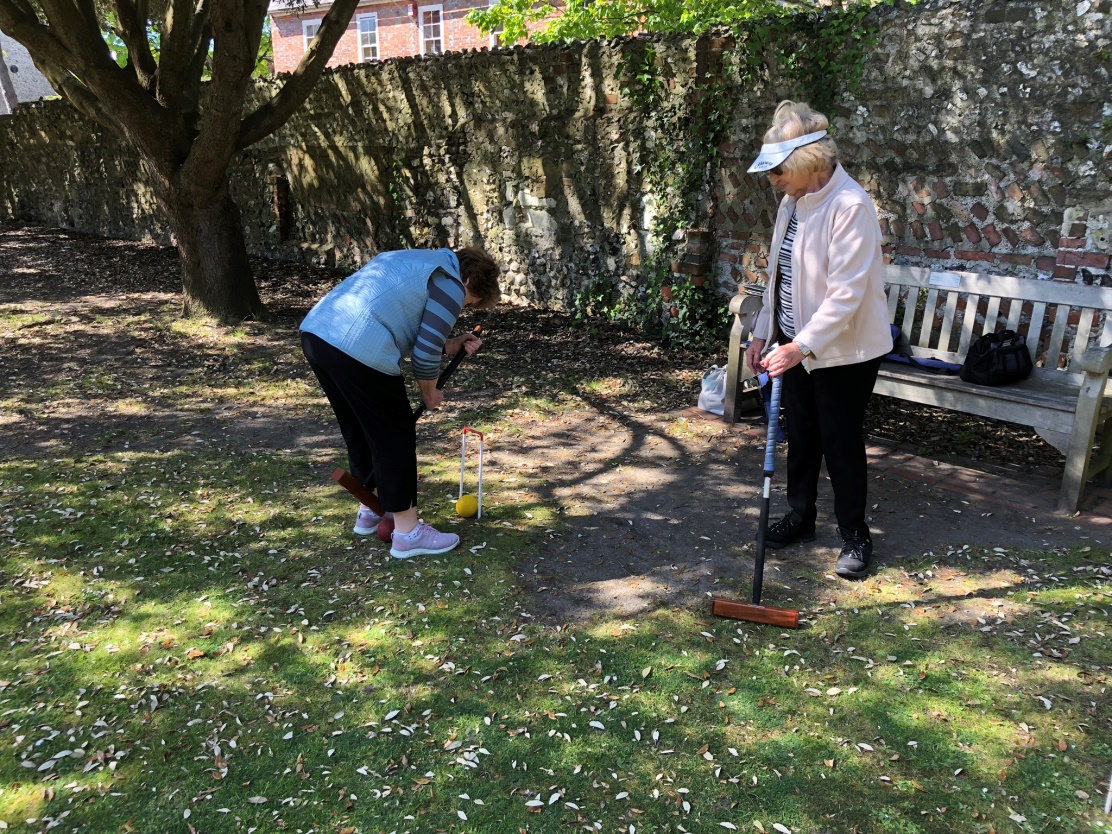 Thank you to all our coaches for giving up their time to help to improve the overall standard of play in RCC. It is very much appreciated.

On 12th May we joined many other clubs in the country by celebrating National Croquet Day. From 1pm until 4pm the court was open to any members of the public to play croquet alongside members. We had several visitors of all age ranges who came along for a taster session which helped raise the profile of croquet as a game and may well lead to future applications to RCC. Thanks go to Derek for organising the afternoon and all members who came along to help guide and coach our visitors around the court. Although I was there to help meet and greet our visitors and play a little croquet, I omitted to take any photographs of what was a very successful afternoon. Apologies, as it was an excellent opportunity to showcase our contribution to the Rottingdean community.

The last Saturday in April was another less than inviting day in terms of the weather which happened to coincide with our End of Month Tournament. However, twelve members and Alan Stiles, our EOM organiser, braved the elements and six pairs took part in the competition which was narrowly won by new member, David and The Chair. Thanks to Alan for officiating in person for April’s tournament and for scheduling all the volunteers for the remaining EOM Tournaments this season. 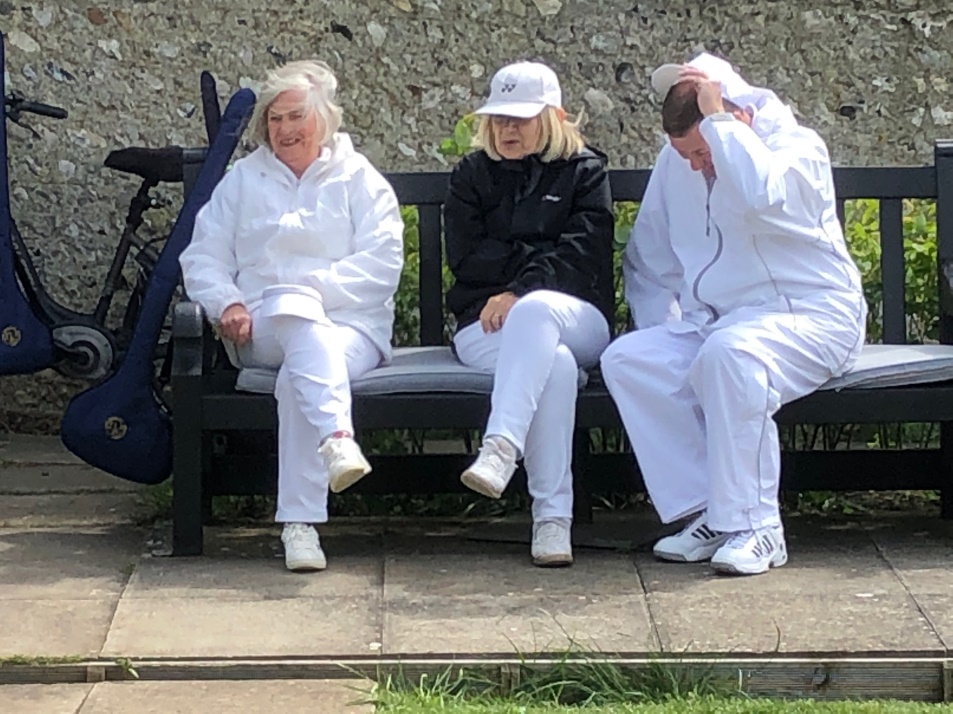 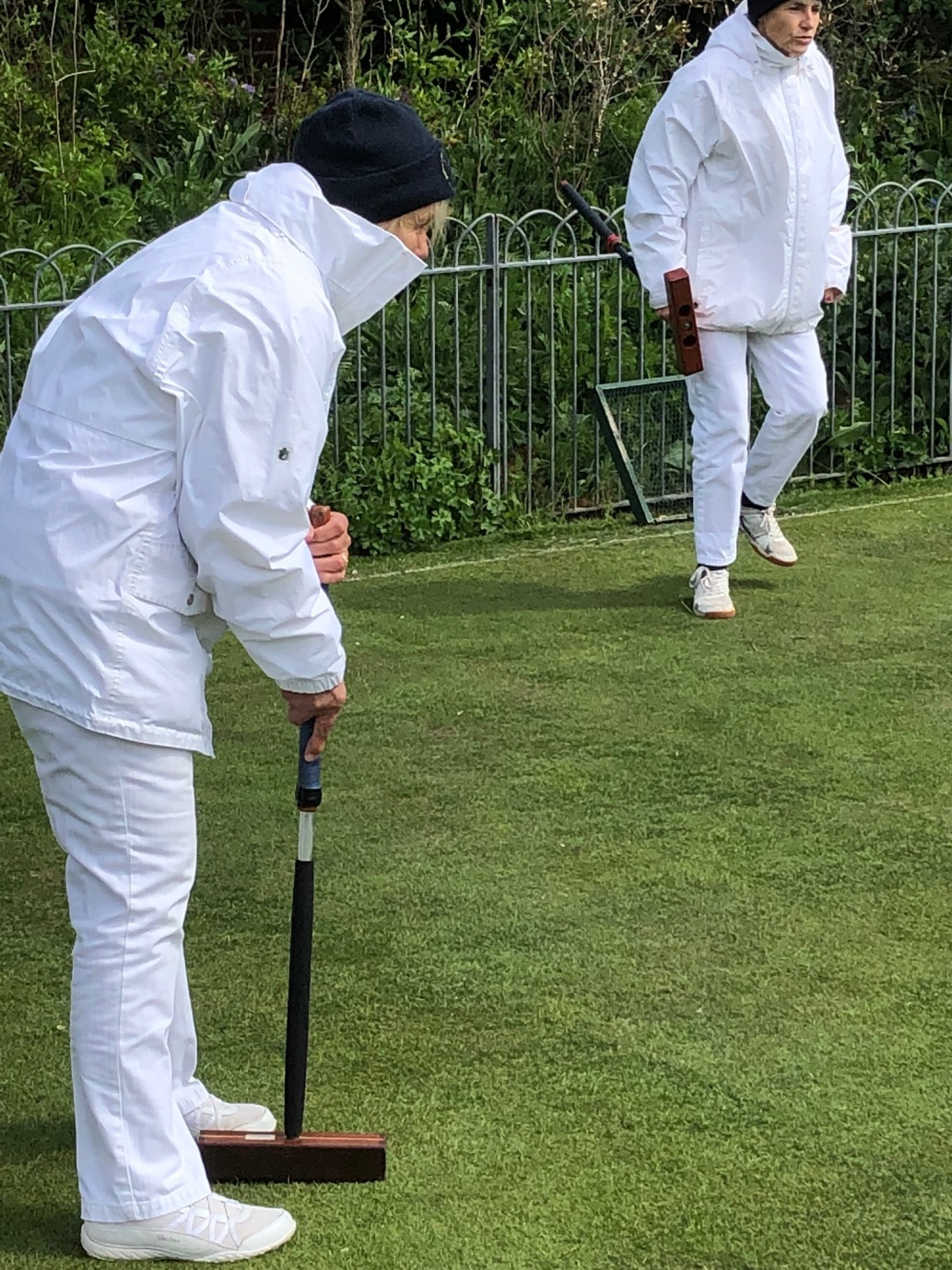 Isobel and Trish out on the court – woollen hats ‘de rigeur’ 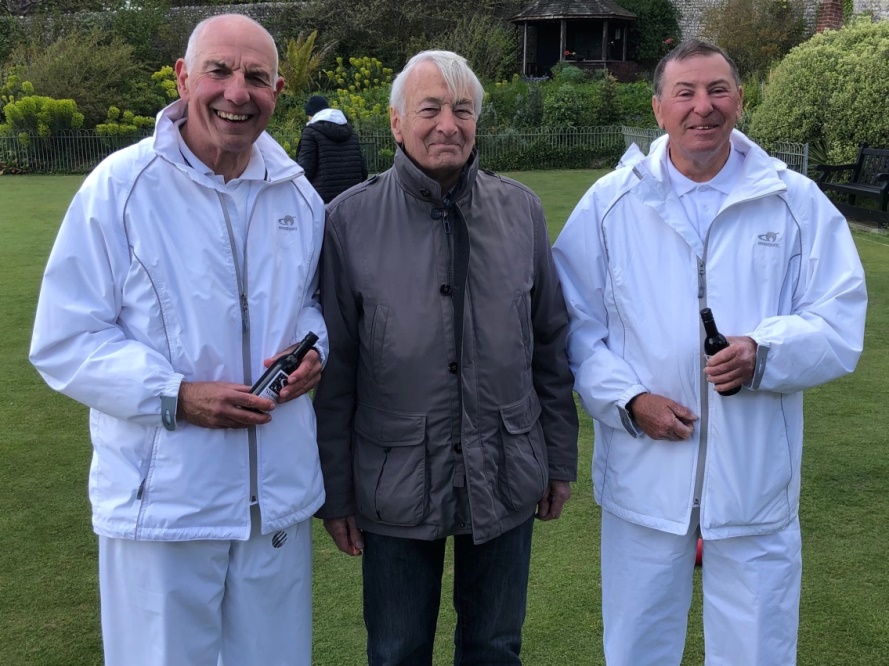 April EOM Winners (in co-ordinating matching waterproofs) pose with their prizes with Alan, while Trish gathers in the hoops in the background

May’s EOM Tournament was well attended in warm sunshine and Richard did a fine job in terms of organisation. The only pair to win all three of their matches, resulting in them being crowned the winners, was Brenda and Alan. Congratulations to them both. 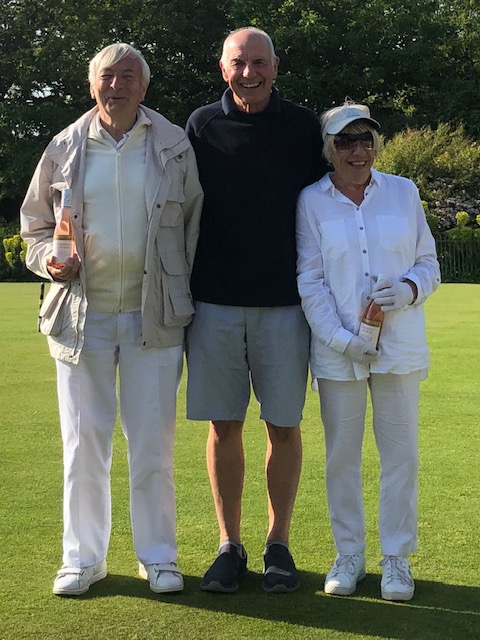 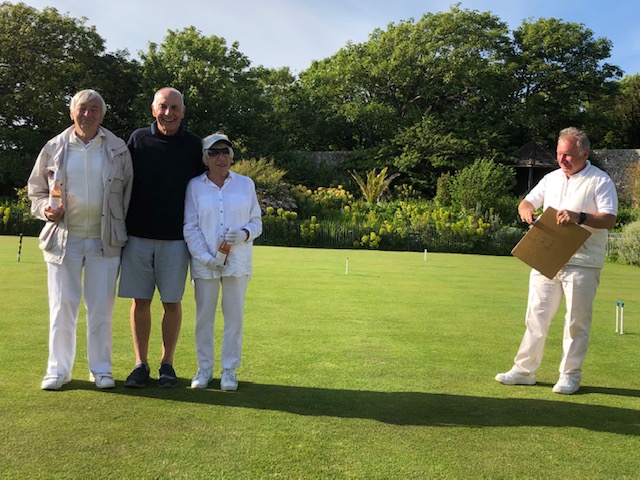 ……………..and the May Sunshine Brought Out the Crowds

The first Friendly GC Match of season was played away at West Chiltington. Wray, Jackie, Alison and I travelled over to their beautiful location on Tuesday 21st May which was a warm sunny day. We played two doubles matches and won them both followed by four singles matches of which we won two, making the overall result a 4 – 2 victory to Rottingdean.

We thought we were merely playing in a friendly GC match but, as you can see from the photo taken by one of the opposition, we found ourselves in what looks like an episode from what was a very popular Sunday evening television programme! 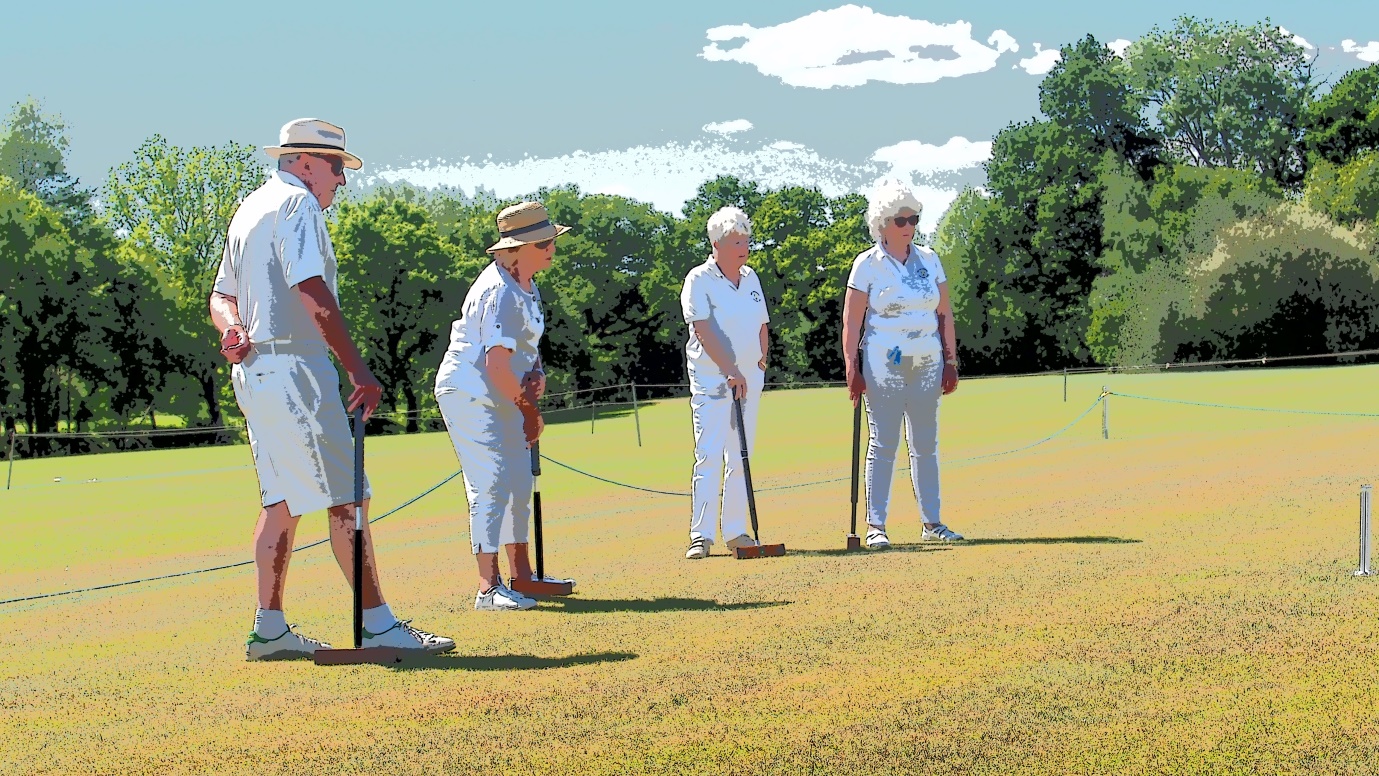 Wray and Jackie pursuing their part time career as extras in

Thanks must go to Trish for taking on the role of managing the Club’s website following Simon’s leaving of the Club. This newsletter and other information can also be found on the Club’s website together with the online court booking system.

On Wednesday 12th June we are planning to go on our first Away Day of the season to Michelham Priory. Thanks to Alison and Jill for organising this in the absence of a Social Secretary. Also, we are grateful to Sheila and Sue who have taken on the responsibility of organising our Away Day to Horsted Place later in the season, arranged for Tuesday August 22nd. Ann and Elaine are organising our Christmas Lunch, the date and venue for which have yet to be decided and Wray Judy and I are getting together to be responsible for the organisation of the Quiz Night sometime towards the end of October.

It looks as though we have all our usual social events covered despite having no Social Secretary for this season which is testimony to Denise’s successful programme in previous years. Our thanks go to her for her help and advice to this season’s team of volunteers.

Some rule changes have been introduced to Golf Croquet from March of this year and we are starting to get to grips with them thanks to some members who have been on explanatory courses. Coaches and other members who are au fait with the changes will, where appropriate, point them out to fellow Club members if and when the need presents itself in play.

Lastly a photograph taken by Richard of our newest recruit, Robin, who is checking to see that the standard of cleaning of the pavilion has been maintained to the expected levels. 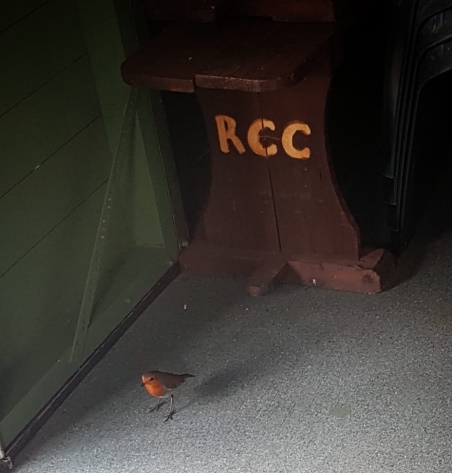 ‘Did I just see a few biscuit crumbs or is that just dust from members opening up their mallet covers for the first time?’

Enjoy your croquet everyone.