I am writing this on the very day that our court is closed for the maintenance of the boundaries by Evan who takes great pride in ensuring, within the limits of the Council budget, that the court is in the best possible condition.

He worked hard in the closed season to undertake all the necessary work on the lawn and when we opened in late April his efforts were clearly evident. However, it wouldn’t be Rottingdean Croquet Club if the court didn’t prove attractive to wildlife and, sure enough, within two weeks a fox decided to scratch around in a couple of places in search of some tasty morsel. Luckily his or her appetite was sated quickly and the damage was minimal. Derek attended to the damage asap and there have been no subsequent visits.

Please keep replacing the eight wire cages around the hoop holes and any visible damaged areas as this is really paying dividends.

Evan’s next challenge is to treat the patches of clover that seem to appear every season and he has told me that he has ordered the necessary product from Brighton and Hove Council.

We are now seven weeks into our 2018 croquet season and, following a delayed start due to the persistent rain in early April, the weather has generally been kind to us enabling many of us to make frequent visits to the Club.

We have held two End of Month Tournaments and thanks to Paul and Judy Hilton and Derek and Sally Mepham for running these.

Denise and I won the April Tournament and, rather embarrassingly for me, were featured in the June/July issue of Rottingdean Village news. The magazine has strict deadlines, so I had written the article before the tournament took place leaving a space for the photograph of the winners and look what happened!

The photograph of May’s winners is far more interesting as it looks as though Brenda and Nick H have just won the End of Month Tournament at The Sahara Desert Croquet Club.

Unfortunately, the camera taking the picture was set on video mode, making it necessary for a whole lot of processes to be undertaken in order for a still to be made from the available 1.9 second long action packed video. Hence the parched appearance of the court and the somewhat contradictory caption ‘Perfect Pic’! 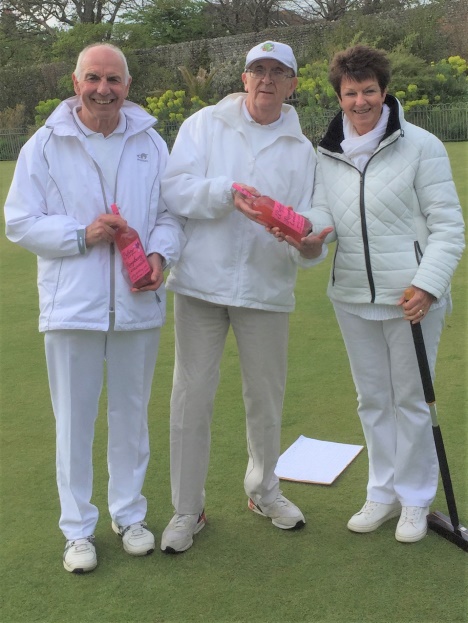 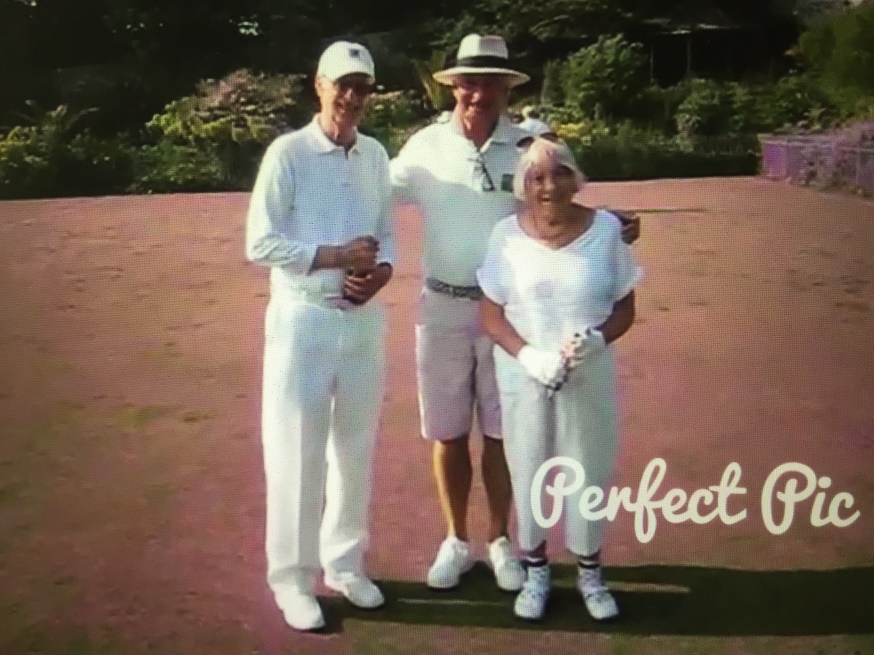 May End of Month Tournament Winners

We have five new full members who have been undertaking coaching on Friday afternoons. Four full members decided not to rejoin the Club in 2018 for a variety of reasons. Hence we have a full membership of 54 compared with last season’s 53.

Isobel, Mike O, Ivan and Margery continue to undertake their coaching duties on a regular basis. We have coaching programmes at various levels for both Golf and Association Croquet and thanks go to all who help run these sessions.

On 28th May several Association Croquet players met up and, with some coaching tips from Frances, had a fun morning introducing the game to one of our existing members who is embarking on learning how to play the game.

Forthcoming Association Croquet events include a friendly match at Rother Valley on 26th June and Ladies’ Day at Southwick on 4th July.

We have played two friendly Golf Croquet matches. The first was against West Chiltington (away) where we were soundly beaten on courts very different from our own. The grass was so long it was a real achievement for some members to get their ball all the way to the next hoop! Local knowledge was a real advantage.

Thanks to Denise, Trevor, John and Sue E for representing us.

As ever, we must thank Wray for organising these matches on our behalf and Jackie for helping Wray in hosting all our home matches.

We have played the first of our four Golf Croquet Restricted Level Play League matches against Sussex County CC (Southwick) on 22nd May.

In the morning session Ivan and I lost our doubles match and Trevor and Wray both lost their singles matches. Therefore, with a 3-0 score to Sussex County CC, things were looking rather glum for Rottingdean CC at the lunch table.

I’m not sure what it was that Sussex County actually served up for lunch but, whatever it was, it energised our team who promptly went out and won all the afternoon singles matches finishing up 3-4 winners!

The Hilda Clements Golf Croquet Tournament is now underway and one or two matches have been played already. In order to avoid a last minute rush, please try to arrange your matches sooner rather than later.

All matches must be played by Friday 13th July and thanks to Derek for organising the tournament so efficiently.

If anyone is in need of help with the online court booking system please do not hesitate to contact me and I’ll be happy to help. I know that opinions are divided on this change to the court booking system, but I would ask members to give it a try and persevere as, like anything new, it’s easy when you know how.

We are looking forward to our forthcoming Away Day ay Gyll Manor on 20th June. This is a new venue for the Club and we must thank Denise for her careful research and negotiation on our behalf. Here’s hoping for a fine day.

A reminder that Kipling Gardens are unlocked on a Saturday, Sunday and Bank Holidays (Evan unlocks during the working week) and locked up every day by a group of local volunteers. The gates are locked from 7:00pm to 9:00am to help with not only the security of the gardens themselves, but also of our Club.

Understandably, the organiser of the volunteers is reluctant to give out keys to a large number of people, so we are unable to provide a key for every member. With the exception of coaches who unlock for early morning coaching sessions, it is unlikely that there will be a need for members to have access to the Club before 9:00am.

The system works very well and we are grateful to the volunteers who make time to fulfil their duties. Please thank them if you get the opportunity.

Meanwhile keep on enjoying your croquet and I leave you with a quote from Rose Macaulay (early 20th Century novelist) who was clearly not a previous member of Rottingdean CC “….so they left the subject and played croquet, which is a very good game for people who are annoyed with one another, giving many opportunities for venting rancor.”